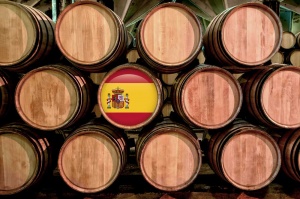 Despite continuously shrinking tendencey under the EU voluntary program to reduce surplus wine production, the Spanish wine industry still possess the vastest producing area in the world. Spain produced very large volumes in 2014, and this boosted wine exports by 20.5% although at a lower price. This activity positioned Spain as the world's No.1 wine exporter according the The Guardian. However, total demand (domestic consumption + export) represented only 59.6% of its overall supply. In 2015-2016, the industry is hiccuping from its excesses.

The VINEX Varietal Index shows the price movement of the major vatieties in Spain. Due to excess supply in 2014, the price of Spain's main varieties followed a similar trend and suffered instability in 2015 and 2016.

The bulk sector witnessed a consistent performance, with relative stable price ranging from 0.41-0.45 EUR/L. Meanwhile, the projected annual bulk export volume would be around 1,195 million litres in CY2016.

The market data displayed has been assembled from in-market surveys, various published reports and with the assistance of industry experienced confidantes. No trading decision should be based solely on the information provided.

You should discuss your specific requirements with a VINEX Manager.