In the first of our new series looking at the likely size, quality and forecasts for different harvests around the world...

We turn to France to see what we can expect from what has been one of the most difficult and disrupted vintages in history. 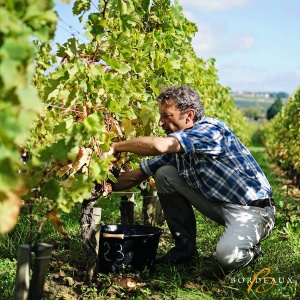 According to the National Wine Union, 80% of French wine regions were affected by the early April frosts, from Bordeaux and Burgundy to Rhône and the Loire.

Total national production is forecast to nosedive by between 24% and 30% in 2021, taking it to a “historically low” level, according to the country’s agriculture ministry.

"For now, it looks like the yield will be comparable to that of 1977, a year when the vine harvest was reduced by both destructive frost and summer downpours," the ministry said.

This has been exacerbated by the fact that the weather before the frosts struck had been mild, encouraging the vines to bud. Additionally, heavy summer rain and high temperatures conspired to promote the spread of mildew, further hampering producers’ work.

Julien Denormandie, the agriculture minister described the April frosts as "the biggest agronomic catastrophe since the beginning of the century"

Jérôme Despey, at the National Federation of Farmers’ Unio, said “The financial equilibrium of some vineyards is clearly going to be called into question because they have lost all their output.”

Depsey added that he hoped prices will rise to go some way to compensate the decline in production, but added that most vineyards couldn’t afford to hike them up too far as they feared losing market share to rivals in Spain, Italy, the US, Australia and elsewhere.

There is still some time before grapes are picked in several regions, and the preliminary forecasts are focused mainly on quantity rather than quality.

However, it certainly highlights the extent of the damage caused by the spring frosts which proved to be particularly troublesome for those grape varieties that start their growing cycle earlier such as Chardonnay and Merlot. When the frosts hit in spring, Burgundy producers said they were most concerned for their Chardonnay grapes rather than their later budding Pinot Noir. 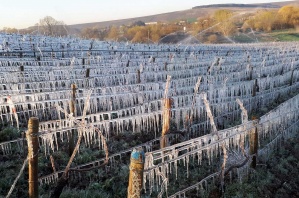 In Champagne, frost destroyed around a third of first buds, mostly Chardonnay grapes, while producers were also particularly badly affected by severe outbreaks of mildew fungus following heavy rain in the region.

“The earth is so wet that it is even impossible to enter the rows of vines to work the soil and the leaves,” Anne Malasasgne, co-owner of family-owned producer AR Lenoble told Decanter.

The Pinot Meuniers were by far the most badly affected varietal, she said, while the Chardonnay grapes have been largely spared. Everything depends on the weather forecast by mid-September.

The deputy chairman of the Comité Champagne Maxime Toubart told Reuters he feared up to half of the 2021 vintage may have been lost following harsh frosts in the spring and the recent mildew outbreaks. He said he didn’t expect to see any immediate issue with Champagne supplies as producers have good reserves.

Champagne industry leaders have set a maximum yield for the 2021 harvest at the more normal level of 10,000kg per hectare, up significantly compared to 2020. This comes after a ‘dramatic rebound’ in global demand for Champagne.

Further east and Alsace got off relatively lightly with its vineyards generally behind much of the rest of the country in the growing cycle. However the region is facing a smaller harvest compared to the five-year average because of fungal disease brought on by the warm, damp conditions.

Bordeaux was hit by two outbreaks of frost in April and early May, but the situation is much more varied.. Sauvignon Blanc was most affected, and this is expected to hit white wine production at some estates, although the damage caused by frost was actually less than that incurred in 2017.

Although damage was still being assessed, there were fears that between 30 and 50% of the potential Languedoc wine harvest may have succumbed to the sub-zero temperatures, according to the Languedoc wine body CIVL.

In the Loire, the situation is looking bleak for some producers battered by the inclement growing conditions during the year.

Benoit Gautier of Domaine de la Chataigneraie in the Vouvray region, had to contend with temperatures dropping to as low as minus 6C in April and despite attempts to minimise damage by the use of candles in the vines, destruction on his estate was widespread.

As if this was not bad enough, two months later his vines were hit by hail so heavy that Gauteir’s vineyards, which are normally 1.5 metres high, were cut down by around 75cm. Then, just as the remaining vines began to flower, heavy rain fell for weeks, resulting in widespread mildew.

" It’s rare to have so many problems in the same year "...Gautier told The Times

He is expecting his 2021 vintage to be down to around 20,000 bottles compared to the more typical 70,000.   He believes that any price rises that will result because of the limited production this year will mainly benefit the premium end of the French market, such as top end Bordeaux and Burgundy wines.

Gautier produces still and sparkling wines which sell at the $8 to $18 price point, and said any price rises he introduced would be at a level “that consumers wouldn’t notice”. However, despite the challenges he has faced this season he said it was important to retain a sense of perspective.

"We’re going to have a structurally low harvest, but I would not call this year a catastrophe"

It’s not just the weather that has been giving French producers grief – growers in the south of France are currently battling with a wildfire which broke out last week in the Var region, located between Provence and the French Riviera, which forced thousands of people to evacuate.

Spread by the strong Mistral wind, the blaze, the worst in the area since 2003, has  mostly affected forests, but several rose growing wine areas were also hit.   According to the CIVP the region’s producers’ association, it was still unclear as to the extent of the damage, though the National Federation of Agricultural Workers’ Unions estimated that 73 wineries and five cooperatives were affected.

Maison Mirabeau was one estate that has been hard hit by the fires. 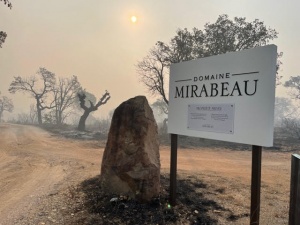 The vineyard’s British owners Stephen and Jeany Cronk described the past few days as “heartbreaking” as the fires swept across their land.

“We have been watching in agony and praying for our Domaine Mirabeau and the vineyards of our colleagues and partners in the fire as all our life’s work is put at risk by the raging fires,” they said on a post on Instagram.

Stephen Cronk said it was too soon to assess the extent of the damage to their vines and outbuildings. “For us it’s uncertain whether we will harvest or not,” he told the BBC.

Despite the fire, some winemakers in the region are still optimistic they will be able to start their harvest by early September, grateful for the fact that minimal skin contact required to produce rose wine reduces the impact of any possible smoke taint.